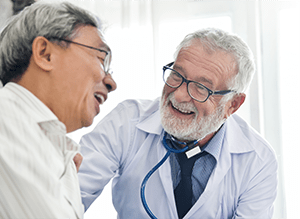 Mid-State Health Center is a community health facility in rural New Hampshire created “to provide sound primary health care to the community, accessible to all patients, regardless of the ability to pay.” Dr. Fred Kelsey, Mid-State’s medical director was intrigued by the possibilities of electronic health records (EHR) for both practical reasons and to support quality initiatives. “It was clear to me an EHR would be a vast improvement over paper charts for daily challenges such as chart legibility and chart access,” he noted, “But it was also obvious that it would be absolutely required to provide new approaches to care such as the Patient-Centered Medical Home initiative.”

Their EHR search received a boost when they recruited CEO Sharon Beaty, who had successfully installed an EHR at her previous practice and was convinced that Mid-State was ready for the transition. Beaty was also certain—based on her successful experience in the past — that CGM eMDs was the right choice. “I had the opportunity to learn about CGM eMDs and its integrated PM/EHR product during my previous EHR project”, said Beaty, “I was absolutely confident that CGM eMDs was a good fit.” The rest of the practice agreed. “We liked the simplicity of use combined with the ability to easily customize the product to meet our needs,” said Dr. Kelsey. They selected CGM eMDs as their choice for both EHR and practice management.

Working with CGM eMDs project managers, Mid-State opted for a methodical, team-based approach to implementation to balance the project work load and minimize disruption to clinic operations. To help with the transition from paper charts, Mid-State pre-loaded CGM eMDs Chart with clinical data using defined guidelines on the data that should be abstracted from the paper chart into the electronic health record.

“This strategy enabled us to delegate many of the chart transition tasks to non-providers, allowing our providers to focus on basic use of the system.” said Beaty. User training was scheduled just before go-live so that staff could put classroom knowledge to work immediately.

In the early stages of the roll-out, Mid-State took a gradual approach toward provider adoption, scheduling a small number of patients to be seen using the EHR, while allowing providers to continue to use their paper charts for the bulk of their schedule. “Our providers were given the opportunity to develop a comfort level with the EHR, which was critical for our success,” noted Dr. Kelsey. As a result, the practice was also able to implement the system with virtually no decrease in productivity.

The approach worked. Within six months, all of the clinicians were successfully transitioned to CGM eMDs Chart, and the practice was using the integrated PM/EHR in its entirety for all clinic operations.

The impact of the EHR on Mid-State has been dramatic. With a streamlined process for progress note documentation, plus the virtual elimination of obstacles such as lost or illegible charts, patient visits grew by over 50%. Since all providers now enter notes directly into the EHR, an annual transcription bill of $160,000 has been eliminated. In addition, paper chart couriers, who would routinely transport charts between Mid-State’s Bristol and Plymouth offices are no longer necessary because both locations have instantaneous access to all patient data from a single database.

By using CGM eMDs documentation tools, coding accuracy has significantly improved. “Before the EHR, providers would guess at the right code, often based on how much time they spent with the patient,” said CFO Bill Sweeney. “With CGM eMDs, the system provides them with coding guidance based on their documentation— the guesswork is taken out of the equation.” The combination of the improved physician productivity and more accurate coding has helped support healthy 17% salary increases for their physicians.

Buoyed by their success with CGM eMDs, Mid-State was eager to embrace new care models such as the Patient Centered Medical Home. The medical home program is a significant departure from traditional fee for service practices, with a strong focus on preventative care and disease management. When presented with the opportunity to apply for a statewide medical home demonstration project, they jumped at the chance. After an extensive application process, they were one of about a dozen practices selected to participate in New Hampshire.

As part of their participation they have been required to submit extensive data for the NCQA’s (National Committee for Quality Assurance) Physician Practice Connections®—Patient-Centered Medical Home (PPCPCMH™) program. Fortunately they had the right tools — and a good partnership with CGM eMDs, to provide a detailed submission.

For example, Mid-State has made liberal use of CGM eMDs Rule Manager—a set of features that enables a practice to track care management issues and generate reports for their patient population. When Mid-State identified challenges in generating the appropriate reports, they collaborated with CGM eMDs to enhance the reporting module to meet the guidelines. For issues that required new features, the CGM eMDs staff incorporated the changes into future releases so all customers could benefit from the new functionality.

Their efforts were successful: Mid-State was awarded NCQA’s rigorous Level 3 Medical Home certification. Both Dr. Kelsey and CEO Beaty are excited about the potential of utilizing patient data to better manage patient populations and chronic illnesses. Dr. Kelsey concluded, “CGM eMDs has been instrumental in working with us to achieve our vision of using technology to more effectively manage our practice and provide better care. They have been a key part of our past success and are critical to our future.”